It’s no great surprise that Milton McGregor likes to gamble.

“I like the crap tables and blackjack,” Alabama’s most iconic gaming mogul said last week. “I like to roll the dice.”

And that’s what he’s doing at VictoryLand, his bingo casino outside Montgomery that has been shuttered for most of five years now after court orders and raids by the state.

He is rolling this dice, wagering that after a Thursday appeal of that ruling by Attorney General Luther Strange’s office the Alabama Supreme Court — which appointed Shashy in the first place — will break tradition and precedent and rule in his favor.

He is throwing dem bones, betting old customers who have turned to nearby Indian casinos in VictoryLand’s absence will come again when and if the doors are opened.

Yeah, Milton McGregor is a gambling man. And he’s betting the house — against long odds — that years of political intrigue, accusations, a criminal trial, acquittal, more court battles, feuds with the state’s top politicians and skyrocketing attorneys fees will come to an end.

Understand that the AG’s office will argue that point, that legal skirmishes will inevitably continue, that McGregor will not see eye-to-eye with the man he calls “Strange Luther” and Luther Strange will not see eye-to-eye with the guy he calls a lawbreaker. Understand that nothing taking place inside a casino — bingo or not — is a sure bet. But for now let’s just focus on McGregor and how he is trying to rebuild his empire.

“I can’t tell what other people are going to do,” he says. “I can tell you what McGregor will do. And I’m going to open.”

He’s sitting inside the west gaming room at VictoryLand, a vast and now empty hall that used to jangle with the sound of 1,500 electronic bingo machines, where new wiring pokes through the carpet as electricians repair damage McGregor claims was done by “Luther’s thugs” who confiscated many of the machines.

McGregor won’t say exactly when the casino will reopen. One of his lawyers, Joe Espy, has said it could open before Christmas, but McGregor said he could not guarantee that.

He wants to get things just right, he said.

“There are very few times you get a second chance to make a first impression,” he said.

So he is taking his time. He’ll open the west gaming room first with 1,000 leased machines, he said.

They cost $25,000 to $30,000 each, so it’s like leasing a fleet of 1,000 vehicles. They’re not the same type of machines confiscated by Strange, but newer models with more bells and whistles. 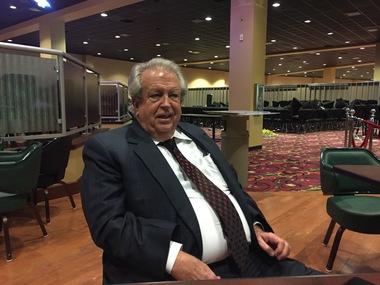 If his gamble pays off, and reopening the west gaming room is successful, he’ll open the east gaming room. If that works he will continue to expand, eventually reopening The Oasis hotel, which now sits like an aging monument in the desert of an empty parking lot.

Now inside VictoryLand, temporary walls make large rooms look smaller, doors are blocked and cafes closed. Before it was shut in 2010, 100,000 people used to come through the doors each week, taking their chances on bingo machines that, to the naked senses, looked and sounded a lot like slots. The casino opened again briefly, but was closed again after Strange confiscated the machines in 2013 in a civil forfeiture case.

All that’s open today is the pari-mutuel betting area, where a handful of people gather above the overgrown racetrack to make bets on races in faraway places.

McGregor greets employees by name as he walks through that space now. He shakes hands with customers and smiles.

He is McGregor, after all. Perhaps  more subdued than he was when his name was synonymous with political clout in Alabama, but the same man.

As always, he points to the positives of his operation, the people employed there and the $320 million in taxes he says have been paid since VictoryLand opened, including more than $50 million each to the state general fund and the Education Trust Fund.

He won’t say how much money he has lost — or how much his operation was pulling down when it ran at full tilt. Just that the cost — and the bill for repairs — has been “substantial.” He is, he says, in the same tax bracket he used to be.

Despite it all. Despite Strange and former Gov. Bob Riley and the courts he’s been fighting for years — and is almost sure to face again.

He’s rolling the dice again. He’s put a lot down, and he’s ready to let it ride.

“I don’t know how I could feel more comfortable,” he said.