Caesars Entertainment, which said last fall that it would renovate the 586-room original tower at the Caesars Palace Las Vegas and rechristen it as the Julius Tower, said Wednesday that it would upgrade another 5,000 rooms in its U.S. inventory be the end of the year.

In addition to Julius Tower, Caesars will improve its Las Vegas offerings by refurbishing the 948-room Augustus Tower at Caesars Palace and the 1,294-room Planet Hollywood Resort & Casino as well as 1,320 rooms at the Paris Las Vegas and 672 rooms at Harrah’s Las Vegas.

Rendering of a Panorama Suite bedroom at the Planet Hollywood Resort & Casino. 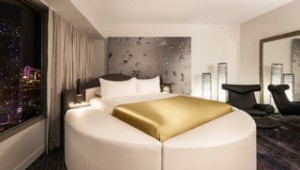 Caesars will upgrade more than 900 rooms at the Caesars Atlantic City as well as at Mississippi’s Harrah’s Gulf Coast and Horseshoe Tunica. Inclusive of Julius Towers, the upgrades will apply to about 15% of Caesars rooms.

Caesars didn’t disclose how much it was spending on the upgrades.