Arkansas voters on Tuesday approved a constitutional amendment to allow the state to issue licenses for four full-fledged casinos.

Your subscription supports journalism that matters.

Issue 4 authorizes the expansion of gambling operations at Oaklawn Racing and Gaming in Hot Springs and Southland Gaming and Racing in West Memphis. Both tracks now offer electronic games of skill under a 2005 state law.

The measure also authorizes the state to issue licenses for casinos in Jefferson and Pope counties, provided there is local support from elected officials. Issue 4 also allows the four casinos to offer sports betting. 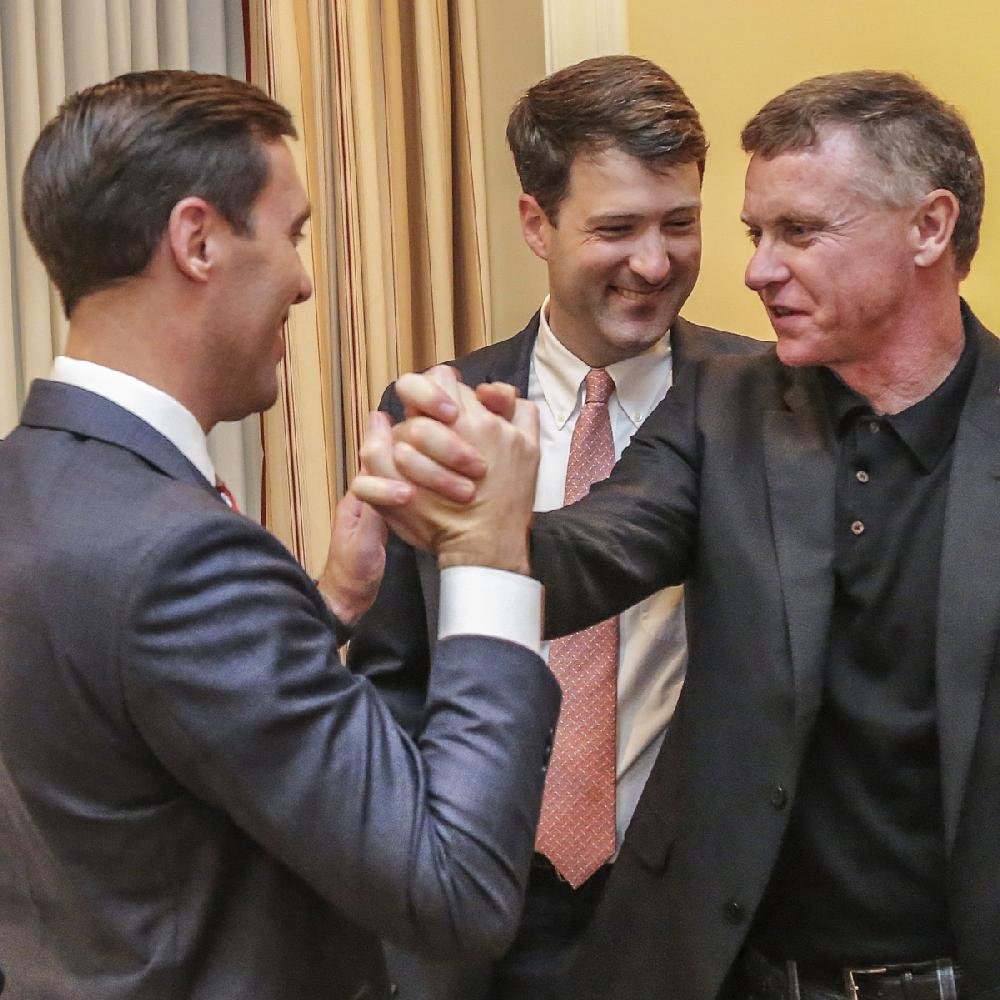 Alex Gray, counsel for the Driving Arkansas Forward committee that sponsored the initiated ballot measure, said Arkansans approved the constitutional amendment because they responded to the committee’s message of wanting to keep tax dollars in the state and of creating jobs and fostering economic development.

“This is really exciting,” he said, adding that Southland plans to make a $200 million investment as a result of the ballot measure.

Jerry Cox, president of the Family Council Action Committee that opposed Issue 4, lamented that “it’s next to impossible to win” without money to fight the advertising blitz by the casino forces.

“We would have mounted an aggressive campaign if we had the money, but people didn’t step up and provide the money,” he said.

Cox said he doesn’t believe he was distracted from fighting the casino amendment by his campaign against Issue 1, which would have limited damages in certain civil lawsuits and attorneys’ contingency fees and allowed the Legislature to rewrite the state Supreme Court’s rules. Last month, the Supreme Court ordered the secretary of state not to count votes cast on Issue 1.

“I did not support this initiative, and I continue to have great concern over the immediate and negative impact on the state’s budget,” Gov. Asa Hutchinson said of the casino proposal.

“But the people have spoken, and I respect their will,” the Republican governor said in a written statement. “Time will tell as to what this means for our state, and it remains to be seen as to whether the communities affected will consent to the gambling initiative.”

In Pope County, voters approved a proposed ordinance that would require the county judge or the Quorum Court to get the permission of voters in a local election before supporting a casino in Pope County.

Incomplete, unofficial returns on the proposed ordinance were: 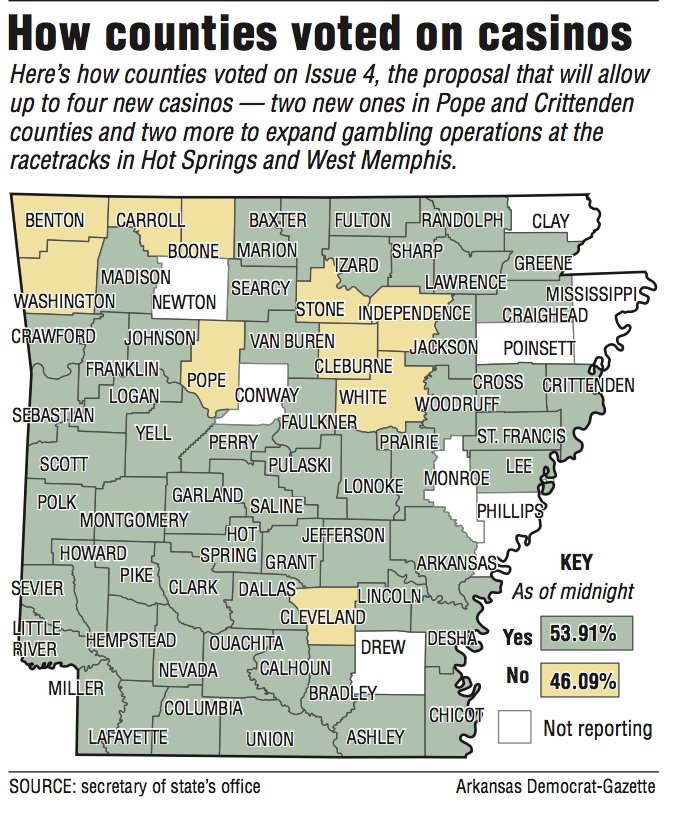 A map showing how counties voted on casinos.

Delaware North also contributed $1.91 million to the It’s Our Turn committee that backed Issue 4. That committee spent $1.71 million through Oct. 27, according to that committee’s report.

Southland supported Issue 4, while Oaklawn didn’t take a position, according to officials for the two companies.

On Oct. 11, the Arkansas Supreme Court rejected separate requests from opponents to order Secretary of State Mark Martin not to count votes cast on Issue 4.

State Department of Finance and Administration officials projected that state government would receive $36 million less in tax revenues in fiscal 2020, which starts July 1, and fiscal 2021 if voters approve Issue 4.

The department attributed the projected drop to two factors: Oaklawn and Southland would be taxed at a lower rate and the agency assumed that new casinos around Pine Bluff and Russellville wouldn’t open until fiscal 2022.

But Gray maintained that the projections were flawed because they didn’t factor in growth of Oaklawn and Southland as full-fledged casinos and officials wrongly assumed it would take two years rather than one to open the other casinos.

Gray provided projections that the four casinos in fiscal 2021 would raise state revenue of about $66 million, which would be a slight increase over the $64.3 million raised through the electronic games of skill at Oaklawn and Southland in fiscal 2018. He also projected the casinos would raise about $23.4 million for cities, about $21 million for purse support for horse and greyhound racing, and about $9.6 million for counties in fiscal 2021.

A proposed constitutional amendment authorizing casinos in Arkansas was last on the ballot in 2000 and it was defeated.

In 2006, voters approved Amendment 84 authorizing raffles and bingo games run by charities, religious organizations and other nonprofit groups. In 2008, they approved Amendment 87, which authorized a state lottery to raise money for college scholarships.