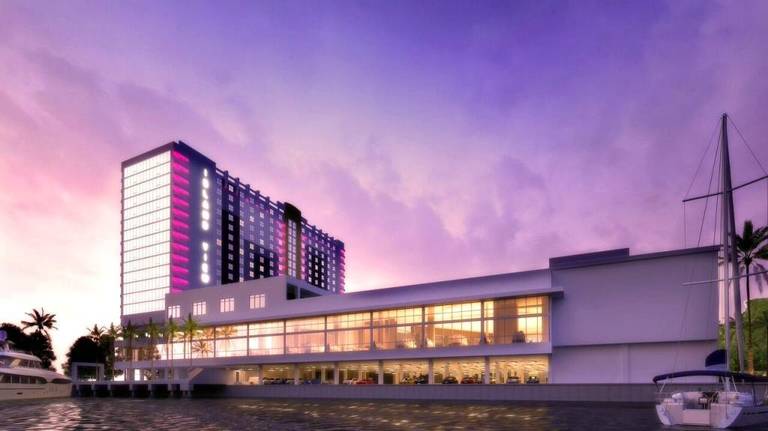 Wednesday’s groundbreaking for a $75 million Beach Casino at Island View Casino Resort was a celebration for the city, and for two friends who are the only local owners of a casino in South Mississippi.

When it opens next summer, this new casino south of U.S. 90 will be smoke-free, giving customers a choice of a smoking casino on the north side of the highway or a non-smoking casino to the south, connected by an enclosed crosswalk over the road.

Making the most of the resort’s waterfront location, floor-to-ceiling windows in the new casino will overlook the Gulf.

Owner Rick Carter called it an “off-the-charts casino” and said the combined 123,000 square feet of gambling space north and south of U.S. 90 will be the largest in South Mississippi and the state.

Carter said his brother reminded him in a phone call that next year it will be 30 years he’s been pursuing his dream of operating a casino in his hometown. He started with casino cruise excursions and then Copa Casino, which was destroyed by 2005’s Hurricane Katrina.

“He believes in Gulfport and this Coast,” Gulfport Mayor Billy Hewes said of Carter at the groundbreaking ceremony.

With this expansion, Carter said he and his childhood friend Terry Green will have invested $400 million in Island View and Gulfport since they went to Las Vegas after Katrina and bought the Grand Gulfport from Harrah’s.

The Beach Tower that was damaged in the storm was restored and opened in 2015 at a cost of $58 million, and this new casino and amenities will top that at $75 million.

“The addition of jobs this project is going to create is wonderful,” said Jerry Griffith, who serves on the Mississippi Gaming Commission and lives in Gulfport. The expansion will bring 250 new jobs at Gulfport’s only casino.

Carter said the expansion also will bring more amenities their customers have requested.

“It’s going to have a show bar,” he said, along with a new restaurant and other food and beverage options. It also will bring games and features designed to appeal to somewhat younger customers.

Roy Anderson, president of Roy Anderson Corp. in Gulfport and a Gulfport native, has known Carter and Green for many years.

“A lot of pride goes into this site,” Anderson said. “We showed up on this site in 1994 with Grand Casino.” The casino was on a barge then, and Anderson built the parking garage that is still on the site. On the north side of 90, the company built the original Grand Casino. “When Rick and Terry purchased the facility after Katrina we did the large addition to the west,” he said. They finished the Beach Tower two years ago and with the casino addition, “this is really going to tie it all together,” he said.

“This was made possible because of what the Port Authority did in negotiating our lease,” Carter said. “They did this for the city and the state,” he said of the commissioners.

The owners are betting the investment in a non-smoking casino and large-scale promotions will increase business.“We have a database that is expanding daily,” Carter said, but he thinks the Coast needs to promote Mississippi hospitality to more people.

“We need to do a better job of marketing the Mississippi Gulf Coast, showing what we are and what we can do,” he said.