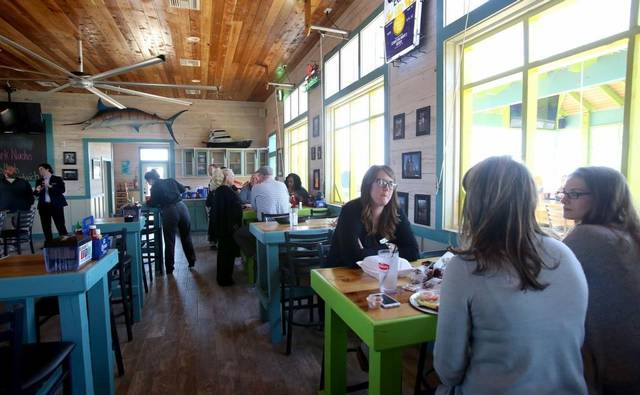 Amenities are always being updated at South Mississippi’s 12 casinos. But what’s new now is evident with Friday’s opening of The Blind Tiger restaurant at Harrah’s Gulf Coast in Biloxi and the announcement of Mississippi’s first Saltgrass Steak House across from Golden Nugget Biloxi.

The Blind Tiger roars into Biloxi

The Blind Tiger restaurant opens Feb. 10 on the beach in Biloxi at Harrah’s Gulf Coast.

Silver Slipper Casino in Hancock County has new amenities coming inside and out in time for summer.

A Beach Bar and Café will be going up in the shade under the Silver Slipper’s hotel, and a swimming pool and deck are planned, along with another bar and food service from the cafe.

“We’re hoping to have that operational in time for Memorial Day,” Ferrucci said.

These are part of $2 million in improvements at Silver Slipper.

“Inside the casino, we’re relocating our keno lounge,” he said, making room to create an oyster bar like those popular in Las Vegas. “They’re a lot of fun and they’re very well received.”

Out on U.S. 90, the sign directing patrons to the casino is being switched to an electronic board.

Other casino improvements in South Mississippi:

▪ Beau Rivage Resort & Casino’s customers asked for fresh seafood from the Gulf of Mexico, so the Biloxi resort remodeled its Coast venue into Coast Seafood & Brew, which offers a big variety of oysters and fresh seafood.

Those who arrive at the Beau in an electric car can get a charge at one of two Tesla chargers or two Clipper Creek charging stations for non-Tesla electric vehicles. The resort is one of only three places in South Mississippi and seven in the state to offer the Tesla chargers, which are at the west valet.

▪ Island View Casino in Gulfport is moving forward with the design of a $75 million expansion that is expected to include a casino on the south side of U.S. 90 near the $58 million hotel tower completed in 2015. The resort continues to host community-focused events, and March 4-5 will bring Handmade in the USA arts-and-crafts show to the Coast from the Jackson area for the first time.

▪ Palace Casino Resort recently celebrated two decades in Biloxi with 39 employees. General manager Keith Crosby was recognized for 20 years of service. A $300,000 remodel of Stacked restaurant and the Palace Café & Bakery is complete, and the resort went high-tech with smart thermostats in all the guest rooms to improve customer comfort and achieve 10 percent energy savings. The guest rooms were equipped with LED fixtures in late 2015 and last year all 563 exterior lights were changed to LED bulbs to reduce energy use by 80 percent.

▪ Scarlet Pearl Casino saw its one-year anniversary in December, and a parking garage is under construction at the D’Iberville resort.

▪ Harrah’s Gulf Coast opened The Blind Tiger restaurant Friday with chef and owner Thomas Genin preparing fresh seafood and cold drinks. From the decks, customers will be able to see down into The Great Lawn, which is gearing up to host another summer of concerts and special events. Last year, Harrah’s Gulf Coast completed a $14 million renovation of all 499 guest rooms, its elevators and lobby. The bar at Magnolia House restaurant was expanded to enhance the atmosphere.

▪ Golden Nugget Casino Biloxi customers will be able to use their comps at the Saltgrass Steak House, which parent company Landry’s is building across the street just north of U.S. 90.