Southern Gaming Summit is Back

It was a memorable week in Biloxi in early May as the Southern Gaming Summit (SGS) returned with a new vigor and enthusiasm and featured the inaugural class of the Mississippi Gaming Hall of Fame (see page 61). The conference was held for the first time under the sole ownership of the Mississippi Gaming & Hospitality Association (MGHA), which bought out its former partner following last year’s SGS.

“The MGHA is proud to present the Southern Gaming Summit each year, and this year’s event was particularly meaningful to us,” said Larry Gregory, the executive director of the MGHA. “Since we own the show now, we are directly responsible for its content, which we designed to benefit the industry and highlight all the opportunities available to both commercial and tribal casinos in our region.”

In a transition year, the SGS was held at the Beau Rivage in Biloxi, a smaller venue that encouraged networking and interaction between attendees, speakers and exhibitors.

“We’re very pleased with the results,” said Gregory. “Our exhibitors and sponsors got to meet their customers in a very relaxed setting, and our attendees were able to easily mingle with speakers, creating a unique and powerful networking opportunity.”

The SGS conference kicked off with a welcome reception sponsored by VizExplorer and Rymax Marketing. Revelers took over the pool area at the Golden Nugget and a lavish spread was provided by General Manager Chett Harrison and his staff.

The next morning featured a keynote speech by American Gaming Association President and CEO Geoff Freeman, who delivered his refined message surrounding the legalization of sports betting in the U.S. Freeman contended that before the Supreme Court held the law to be unconsitutional, the issue had momentum because PASPA had failed so miserably. He also said partnerships are the key to success for sports betting, something DFS failed to recognize in its U.S. launch several years ago.

“We’re working with the leagues to see if there’s a deal to be had. I encourage you to look at it through that lens as well,” he said.

“By the time the 2018 NFL season begins, it would be shocking to me if Mississippi casinos weren’t booking bets,” Wallach said. “They need the right outcome, but then, once the regs are issued, it’s going to move quickly.”

Mintas said her company is there to educate the participants in the market.

“When we first speak to the leagues, there’s really a lack of knowledge of how the betting market works, how the integrity systems work, and what is

really needed,” she said. “And we’ve seen that from many of the states, as well… If the system you set up cannot compete with that big black betting market, people will keep betting with illegal bookmakers, instead of coming into the legal market. That’s a real risk that we see.”

Another panel focused on the possibility of the legalization of gaming in Georgia. Featuring state Rep. Ron Stephens, the sponsor of a bill that would do just that, other panelists gauged the interest in the legislature. Part of the hurdle is that it takes a two-thirds vote of each house to approve the bill—120 of the 180 members of the House and 38 of the 56 state senators.

Moderator Ryan Soultz, director of governmental affairs for Boyd Gaming Corporation, was joined by Chris Anulewicz, a partner with Balch & Bingham, and Jeff Morris, vice president of public affairs and government relations for Penn National Gaming. Most panelists agreed that an amendment may be approved by the legislature and a vote held in 2020. And a gaming commission could be set up by 2021, and it would be off to the races.

The important organization Global Gaming Women sponsored the lunch this year, featuring a presentation from Phyliss Anderson, the first female chief of the Mississippi Band of Choctaw Indians, sponsored by Sportradar. Anderson compared the progress of women in gaming to the #MeToo movement that has sunk some very high-profile officials, including gaming’s Steve Wynn.

“The women’s movement easily parallels the efforts under way in Indian Country,” Anderson said. “We seek voices to be heard, and we only want justice, representation and fairness.

“As a female in leadership, and a mother and grandmother to girls, I tell you that I celebrate and cheer these women on as they speak out.”

The speakers were unified in the quality of the event and the benefits for attendees.

“The Southern Gaming Summit continued its tradition as a premier gaming industry conference in 2018,” said Tim Wilmott, chairman of Penn National Gaming. “The sessions were packed with informative insight into the present and future of gaming in the South, and it was capped off with a celebration of industry pioneers who blazed the trail in the Magnolia State. I thoroughly enjoyed this year’s summit, and Penn National Gaming looks forward to participating again next year.” 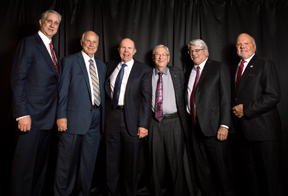 The highlight of the SGS was the Mississippi Gaming Hall of Fame Gala on the final night. With Mississippi gaming approaching its fourth decade, the creation of the hall was a natural evolution, says Larry Gregory of the MGHA.

“We had so many deserving nominees that it was very difficult to narrow down the recipients,” he says. “But with the votes of our 28 member casinos, the honorees were all very deserving and appropriate. And of course, we have a long list for consideration in the future.”

Attended by more than 500 people, they came to honor the pioneers in the Mississippi industry:

• Bernie Goldstein, founder of the Isle of Capri Casinos (named for a small island off the coast of Biloxi), who opened the first casino riverboat on the Gulf Coast. Goldstein died in 2009, and his award was accepted by his son, Robert.

• William S. Boyd, executive chairman of Boyd Gaming, who came east from Las Vegas to develop a casino named after his father—Sam’s Town, in Tunica—and who also helped to develop Indian gaming in Mississippi.

• Tommy Gollott, then and now a member of the Mississippi state Senate from Harrison County, who was instrumental in writing and promoting the legislation that approved casino gaming in the state, especially the dockside element.

• Jack Binion, who, like Boyd, is the son of a gaming legend, who recognized the potential for gaming in the South, and whose Horseshoe casino in Tunica quickly became the most successful casino in the state.

• Rick Carter and Terry Green, two local developers who figured out how to make the most of the new industry, opening the Copa casino in a converted cruise ship in the early 1990s, and who now own the Island View Casino Resort.