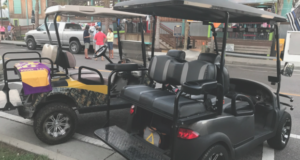 Given the fact that golf carts have become such a popular way to get around Bay St. Louis, especially on sunny weekends when Old Town’s bars, restaurants and shops are in full swing, the Mississippi Coast city’s motto “A Place Apart” could easily morph into “A Place of Carts.”

People drive them to work, parents deliver kids to school in them, political candidates drive them to canvas neighborhoods and parents watch youth sporting events from their carts. There’s even a pirate-themed Mardi Gras group, the Mystic Krewe of the Seahorse, that has a parade featuring lighted and decorated golf carts as their floats.

Nobody knows for sure how many carts are on the Bay’s streets but in the last few years, a handful of golf cart sales and rental businesses have sprung up to accommodate residents and visitors.

Councilman Doug Seal said the golf carts add to the town’s resort atmosphere. “It’s just a different mode of transportation,” he said. A longtime member of the council and its current president, Seal has been researching golf cart rules since 2011 when the numbers of carts were rising. “We realized we needed some type of regulations on them,” he said.

Some critics of the carts point to safety issues among golf cart use, especially under-age drivers.

“The city is trying to be open and let people enjoy themselves but you have to look at the safety standpoint,” Seal said.

Seal said the rules now in place are “a little gray” and he wants something “clear and concise” to effectively regulate the golf carts. In the last couple of years, Bay officials tried unsuccessfully to get a local and private bill through the Legislature and will make another attempt in the 2018 session.

Brett Ladner, owner of Quality Custom Carts on U.S. 90, shifted from a job in retirement planning to selling refurbished golf carts in 2012. His carts range from basic models to stretch versions that seat six and have all the extras like LED lights underneath.

Prices start around $3,700 and go up to $10,000 for a stretch with everything new from top to bottom. He also does short and long term rentals.

Ladner said his customers come from Lake Charles, La., over to Sandestin, Fla. Most customers buy the electric models rather than the gas ones, he said. Buyers use the carts for security patrolling and maintenance jobs. He said his customers’ use of the carts “ranges from the golf course to campgrounds and neighborhoods.”

Ladner believes the golf cart owners generate business for downtown merchants because parking a car on Second Saturday or any weekend is a challenge. The carts are compact enough to fit in small spaces.

Janice Guido, owner of Bay Life Gifts where Main Street meets Beach Boulevard, said her customers find the golf carts fun. “It’s a huge attraction to draw people downtown to shop and eat and maybe move here and be a part of our community,” she said. “They definitely add a really fun vibe to our town by the bay.”

When customers see the carts, often they will ask Guido if there’s a place to rent one. She points them to Bodega Adventure Rentals & Sales on Court Street, a short walk away.

Guido said, “I”m pleasantly surprised how many shoppers notice the golf carts and smile. I’ve never heard a negative comment. We just keep setting ourselves apart with art and special events and art works and all the quirky things we do here.”

Guido’s own golf cart is navy blue and yellow and equipped with seatbelt and other safety features. She said she’s willing to follow any rules and regulations to keep her cart street legal.

“It’s so nice on a Sunday afternoon to ride down the beach. It’s really relaxing and quiet. The puppies just love to ride around.”