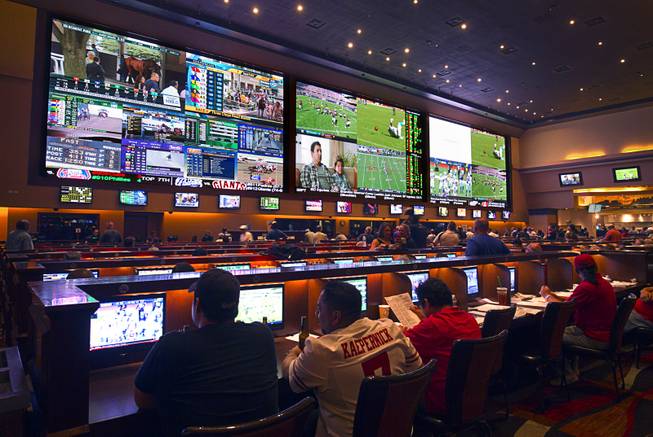 Geoff Freeman, president of the American Gaming Association, gives a “State of the Industry” address during the Global Gaming Expo (G2E) at the Sands Expo Center Tuesday, Sept. 29, 2015.

The casino industry’s largest lobbying group in the U.S. is ramping up its efforts to repeal a 25-year-old federal law that bans sports betting in most states.

The American Gaming Association on Monday announced the creation of a coalition involving organizations of attorneys general and police, policymakers and others to advocate for the repeal of the ban that the industry says has fueled the $150 billion illegal sports betting market.

“The American Gaming Association believes a perfect storm is aligning and now is the time to repeal a failing law,” Freeman said during the announcement. He cited a recent survey commissioned by the organization that found there is strong bipartisan support nationwide for legal sports betting, as well as Oxford Economics research showing that legalizing sports betting in the U.S. could support more than 150,000 jobs.

The Professional and Amateur Sports Protection Act of 1992 bans sports betting in every state except Delaware, Montana, Nevada and Oregon. Legal sports gambling is allowed in those states because they had approved some form of wagering before the federal law went into effect.

Congress gave New Jersey a one-time opportunity to become the fifth state before the ban was enacted, but the state failed to pass a sports betting law in the required time window. The state has asked the U.S. Supreme Court to hear arguments in favor of legalizing sports betting and expects a decision by the end of the month.

The survey commissioned by the association found that 57 percent of independents, 58 of Republicans and 52 of Democrats support ending the ban.

Freeman said the group has hosted sessions with members of Congress to show the technology from European companies specialized in data integrity that that wasn’t available when the ban was enacted.

The association has also met with the players unions of the NFL, NBA, NHL and MLB. The executive directors of those unions have met multiple times over the past several months to discuss the challenges that legalized sports betting could create for players, including potentially being put under pressure for any fixing of matches.

NFL Players Association spokesman George Atallah said the executive directors have discussed the issue of legalized sports betting multiple times, with the conversations centering on “protecting the integrity of our respective sports.”