Mass. Gov. Baker: Fantasy sports a legal a game of skill, not gambling

Governor Charlie Baker said Thursday that he believes DraftKings Inc.’s fantasy sports contests do not amount to gambling and should be legal in Massachusetts, offering his most vocal defense of Boston’s most prominent tech start-up as it prepares for a high-stakes showdown with the New York attorney general.

Baker revealed he had played a free DraftKings game over the weekend and concluded it was a game of skill rather than one of chance, a key distinction that many states use to determine whether the cash contests are a form of gambling that should be regulated or prohibited.

“I’m convinced it’s legal in Massachusetts, I don’t have a problem with that,” Baker said on WGBH-FM’s “Boston Public Radio.

His comments came as DraftKings hinted at some of its legal argument for battling New York Attorney General Eric Schneiderman, who on Tuesday declared that fantasy sports games played for cash prizes were illegal gambling under that state’s laws. He ordered DraftKings and New York-based FanDuel Inc. to shut down operations in the state, but the companies remain active there and say they plan to challenge Schneiderman in court.

Baker’s position differs slightly from that of Massachusetts Attorney General Maura Healey, who earlier this week said fantasy sports are “a form of gambling,” according to a report published on masslive.com. The difference between the two viewpoints may not amount to much legally in Massachusetts, as Healey went on to note: “Just because it’s gambling doesn’t make it illegal.” 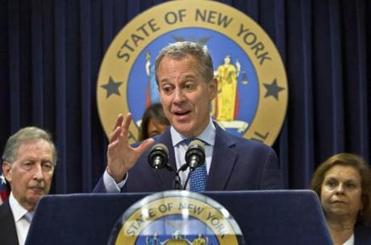 Declaring the fantasy sports sites illegal is an attention-grabbing move by a swashbuckling attorney general’s office.

On Thursday, Healey sought to distinguish the legal conditions in Massachusetts from those in New York.

“The attorney general has said that she does not believe we should use our criminal statutes, which never envisioned daily fantasy sports, to shut this entire industry down,” a Healey spokeswoman said.

Baker left open the possibility of some form of regulation of the fantasy sports. He said he is awaiting guidance from Healey, who is reviewing the regulatory environment in Massachusetts.

“It’s a new enterprise, it’s a new business, it’s a new way of engaging people in these games of skill,” Baker told WGBH.

DraftKings, which employs about 250 at its headquarters in Boston, has raised more than $600 million since launching its games publicly in 2012. FanDuel has raised nearly $400 million. The industry is projected to collect nearly $4 billion in revenues this year.

But their business prospects are now under extreme threat in New York, which has 13 percent of active paying daily fantasy players in North America, the largest of any state, according to Adam Krejcik, an industry analyst with Eilers Research LLC. DraftKings and FanDuel combined are expected to reap about $40 million in revenues this year from New York players.

In dismissing the case, US District Judge Dennis M. Cavanaugh said the entry fees weren’t considered “wagers” or “bets” in part because the contests’ prizes were guaranteed at the outset, rather than being drawn from the pool of player bets. A similar structure is used in DraftKings and FanDuel’s most high-profile contests.

Mastro said Cavanaugh’s ruling augurs well for the company because the laws in New Jersey and New York on the subject are similar. He also said Schneiderman’s position is contrary to other officials in New York, and to other states with similar laws.

In his order to DraftKings and FanDuel, Schneiderman cited a New York law that says any contests involving bets on events outside players’ “control or influence” and involve a “material degree” of chance are gambling.

In fantasy sports, contestants pay a fee and then assemble a virtual roster of real-life athletes and amass points based on those players’ statistical performance. They can win pots that range from a few dollars to more than $1 million.

Fantasy sports providers have maintained that their contests are protected by a 2006 federal antigambling law that contained a specific exemption for fantasy sports. But other federal laws also govern the topic, and there is a patchwork of state laws that determine whether fantasy contests are legal.

DraftKings and FanDuel both refuse to accept contestants from five states where they consider the legal risk too high: Arizona, Iowa, Louisiana, Montana, and Washington. Nevada, meanwhile, effectively shut down the two companies in October after ruling they need a gambling license.

The companies’ legal troubles stem from an incident in October, when a DraftKings employee mistakenly posted critical player information online and then won $350,000 playing on FanDuel later that week. Both companies said the worker, Ethan Haskell, couldn’t have altered his winning entry after accessing the information. But the incident prompted Schneiderman as well as US attorneys in Manhattan and Boston to investigate.

Baker and Healey each said the state should adopt consumer protections for fantasy games, but not impose the strict gambling rules applied to casinos and other kinds of online gambling.

In an interview, Baker made light of his skill at picking a winning roster, saying there was little chance of his becoming addicted to the contests.

“I was so intimidated by it that I don’t think we’ll ever have to worry about me spending a lot of time on it,” the governor said.