Paddlewheeler tours to get started on Coast – Mississippi Business Journal 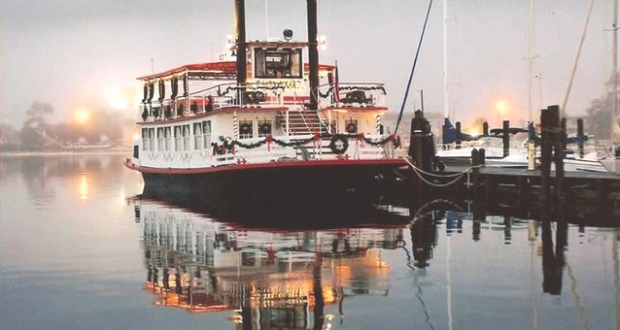 On his last day working as a Mississippi River boat captain, Michael White talked about his next career move — taking the helm of a paddle wheeler he’s bringing to the Mississippi coast this month.

White and his wife, Dayna, both Gulfport natives, are the new owners of the Betsy Ann, a 85-foot stern-wheel paddlewheeler that will take passengers on cruises out of Biloxi. “It’s a replica of the original Betsy Ann built in 1899. It was one of the first steel-hulled paddlewheelers on the Mississippi and Ohio rivers,” he said.

White previously owned the Lucky Duck amphibious boat tours, which took passengers on land and water tours along the Biloxi coastline. Eleven months into the successful venture, Hurricane Katrina hit, and recovery from the 2005 storm was too slow for White to wait it out. “I sold it and had to go back to running boats again,” he said.

A friend in the Biloxi tourism market recently convinced White that the time was finally right for him to return. “He said you need to bring that boat back. The coast is back,” White said.

He started researching boats for sale but the price of a new amphibious vessel was out of reach. White kept looking and found the paddle wheeler in Panama City, Fla., four hours from the Coast. “I told my wife, we’ve got to take a look at this thing.”

The Whites met the boat’s owner and went for a ride on the Betsy Ann. Before long, a deal was struck. “I fell in love with it, and knew this is what I was meant to do,” he said.

By coincidence, Dayna White discovered through her interest in genealogy that generations ago, her relatives and her husband’s both were captains on paddlewheelers on the Mississippi. “That was before we found our paddlewheel boat. We said it’s destiny. We were destined to own the Betsy and keep this memory alive,” he said.

The Whites, who live in Diamondhead, plan to pick up the boat and take it to a shipyard in Mobile for a Coast Guard inspection. Then they will head to the coast around Nov. 17 where they will dock at the Bay St. Louis harbor and the Bay-Waveland Yacht Club. “We want to show it off and do a little trip for friends and family and the local businesses. After that, we’ll start working our way to Biloxi.” When all the permits and licensing are taken care of, the cruises are expected to start the first week of December.

The Whites will offer two-hour day cruises out of the Point Cadet Marina behind Golden Nugget and next to Margaritaville Resort.

The cruises will take passengers between Deer Island and the casinos along Biloxi’s beachfront and into Back Bay. White will do double duty as tour guide, sharing the history of the seafood industry, the barrier islands and Mississippi Sound with an emphasis on coastal ecology. “There is so much rich culture and history here,” he said. “But I’m not going to talk the whole time.” He wants his guests to enjoy hearing the paddle wheel slapping on the water and taking in the scenic coastline. On sunset cruises passengers will have an unobstructed view over the water. “The bottlenose dolphin and the brown pelican are always an added highlight to the cruise,” he said.

They also plan to book private parties with up to 150 guests for birthdays and holidays, convention groups and wedding. The covered open deck upstairs has seats that convert into picnic tables. The downstairs salon can seat up to 80 passengers.

“It can be a year-round attraction, with heated and cooled space downstairs. You can get on the water any time of year.” There’s no galley aboard so the meals will be catered, he said.

The Whites already have booked one private party and another is in the works.

Prices will be $22 per person, $20 for active duty military and seniors and $17 for children 3 to 12 years old.  School field trips prices will $17 for adults and $12 for students with a minimum of 20 passengers. Private charters begin at $700. “My main focus is to bring something to the coast that everybody can enjoy but afford it,” he said.

White’s love of boats and being on the water led him to join the Navy but instead of driving a boat, he was assigned to advanced electronics. After his service, he became one of the first employees at Gateway, the computer hardware company founded on a farm in Iowa. After a while, and with another midwestern winter approaching, he told his boss, Gateway founder Ted Waitt, that he was leaving his job in corporate sales to move back home. “My whole life I wanted to be a boat captain. I left a Fortune 500 company in my late 20s to come down here and get my captain’s license,” he said.

White captained boats out in the Gulf oil fields for years and then moved to inland tugs about six years ago to have more time with his family. He later worked as harbormaster at Beau Rivage, which is when he met families visiting the coast who wanted to get out on the water for short trips that cost less than charters. “I saw the need for family oriented fun that didn’t cost an arm and a leg,” he said. That’s when he decided to start the Lucky Duck amphibious tour business that Katrina cut short.

Now, with the coast in advanced recovery mode, he’s back in the tour business. “I said I was going to do it again when the coast recovered. This is it.”